In this article I will share with you an example of using an established story in the yoga lesson.

There are many ways to use story in the yoga lesson. I have had considerable success using well known children's stories in which I embed the postures. In this article I explain how I used this approach with The Very Hungry Caterpillar

Eric Carl’s The Very Hungry Caterpillar is one of the most popular children’s stories - ever! The fact that the book was forty-seven years old in March 2017 provided a wonderful excuse for Year 5’s to work on it over the term in our yoga lessons. The children had been enjoying their regular yoga session as part of the school day for many terms.

My aims were to:

In order to help them improve those skills we gave each group self monitoring cards. They enjoyed using them and were, in the main, honest and fair in their personal assessments. We found these cards to be a powerful tool to help change attitudes and behaviours.

Each week the children worked in the same groups of five-six inventing postures that represented the items of food that the caterpillar was eating. The children had already been taught to identify the different categories of yoga postures and could, for example, distinguish between a back bend and an inverted posture. By the end of term we had created the postures and were busy pulling it together into a production that we could present to the entire school. 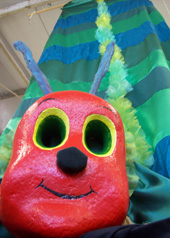 Our only extravagance was a metre high Hungry Caterpillar with a flowing silk body. It was beautifully made by a professional prop-designer. Well, it was Caterpillar’s birthday and we figured he was worth it! We kept the music simple, humming a ponderous melody as the caterpillar sauntered around the presentation area.

The children were highly motivated, exceptionally creative and went about their work with total enthusiasm.   We were staggered by their ability to build on their existing yoga knowledge and create credible postures, which could be classified as a backbend, inverted, side-stretch and so on.   The enjoyment was obvious as they grasped opportunity after opportunity to show their creativity and flair. The presentation, which was watched by the whole school, was a great success.
The self monitoring cards gave the children a focus which helped during the activity. This tool also helped them decide which skills to work on next time. Staff reported better listening behaviours during the weeks of the project and more children were specific in their praise of peers.
I am convinced it worked well because:

The Head and staff were unanimous that it had been a highly successful project because:
(c) Copyright 2017 Michael Chissick & Yoga at School.Not to be reproduced or distributed without permission
If you liked that, you'll love this…

Want to teach yoga to children? Not sure which route to take? This short article will set you on the right course
Reading Time: 6 mins

Bear Hunt in the Yoga Lesson