What is the most important tool in the children's yoga lesson?

A visual timetable is a keystructure in my yoga lessons. I would not dream of teaching a lesson without one. It is imperative – a must have. If I were assessing a student teacher that turned up without a visual timetable I would fail them on the spot. That is how strongly I feel.

The What and When of the Lesson

The idea is simple: Children can see what they will be doing and when they will be doing it.  This is particularly important for children on the autistic spectrum, because "it provides a structure and creates predictability, something that children with autism crave” (Sutton, 2013)

Here is a side view of the stand that holds my visual timetable. I tend to position the stand in the same place each time,normally where everyone can see it as they enter the hall. 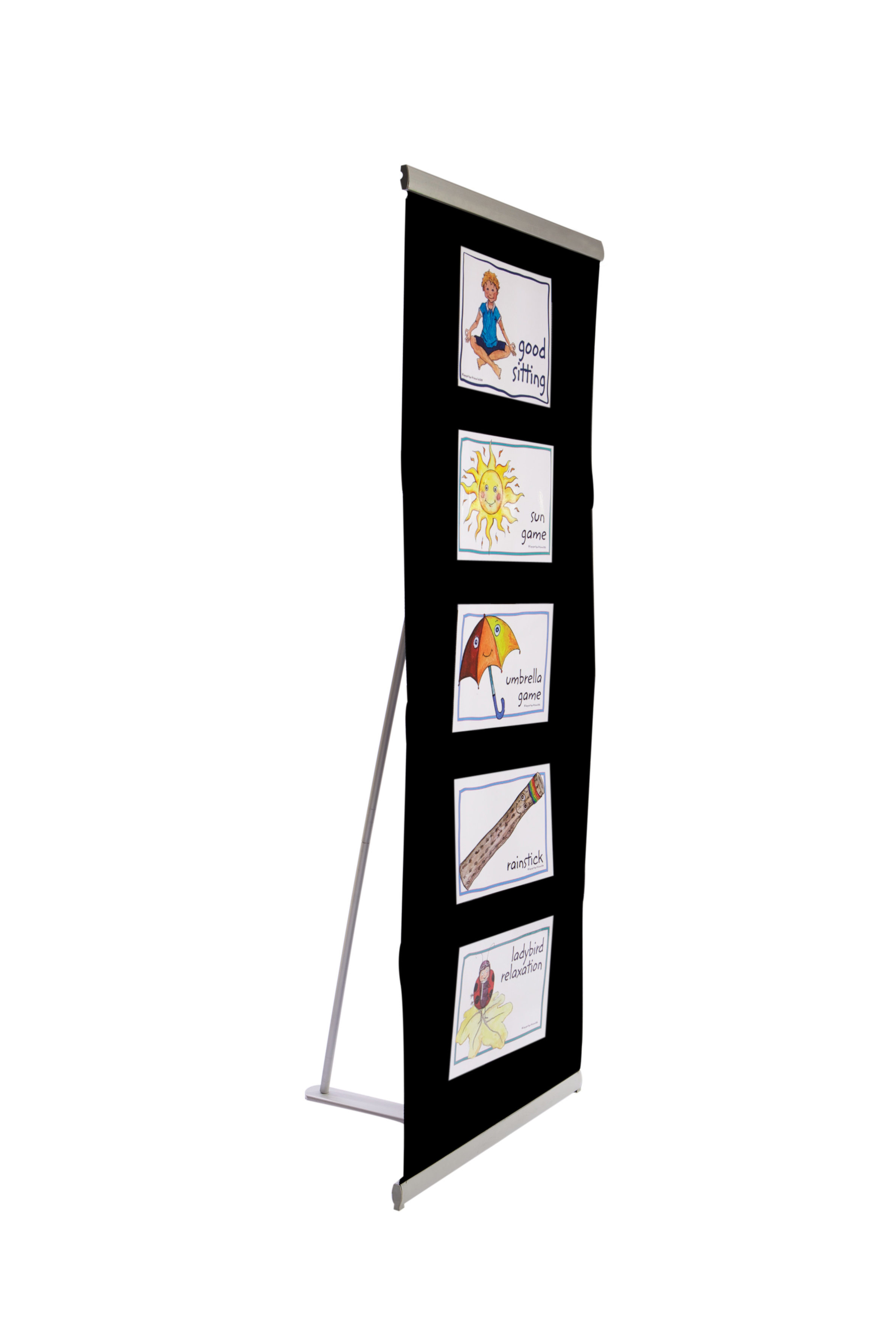 It was originally designed as a magazine or leaflet display stand, but I have adjusted it to suit my purposes admirably. It folds down into a small bag so it is easy to carry into school, but the greatest benefit is that, when set up, it is lightweight and easy to move about the hall.  This means that I can put it wherever the situation dictates.

For example, when Nursery Class line up in readiness to leave the hall, I bring the stand over to them. I choose three or four children to come out individually to point to the posture card on the stand that they liked best.
They can tell the class in their loudest voice what they liked best, for example, " I liked Sun Game”. Good practice for speaking skills and often the opportunity for shyer all children to begin to learn the skill of speaking loudly and clearly.

I have many examples that illustrate the benefits of the portability of the stand. ‘Tania’ is Year 1 child from Russia who suffers from cerebral palsy. This makes moving around difficult without her walking frame.  I move the timetable to her so that she can point out her favourite posture and practice her English at the same time.

Typically my timetable consists of posture cards and game cards showing which games are to be played. Here are some examples of my posture and games cards.
Pupils can clearly identify which postures and games make up the lesson and the running order.

When a visual timetable is a regular part of the lesson there are many benefits. For example, it sends out a clear message to your pupils and other teaching staff that you have planned the lesson, that there is, indeed, structure, and that you are professional and know what you are doing.
There have been several occasions when classes have arrived earlier than scheduled after the break, or I have been delayed. Invariably I arrive in the hall to find the whole class waiting for me quietly in Good Sitting Posture. Why? Because they can take their direction from the visual timetable and they know what my expectations are in terms of their behaviour and attitude.

Often towards the end of each half term I teach a ‘silent’ lesson when I do not speak at all. I greet the class with a card that says 'Hello' and end with a card that says 'Goodbye'.
Throughout the lesson I control and guide the class using the posture and game cards on the visual timetable. Of course, I also use a variety of facial expressions, body language and whatever it takes, but I DO NOT SPEAK
This approach works well for six reasons:

Keeping Track and Getting Stuck

Teaching seven to eight classes a day I often loose track. The visual timetable helps me to keep my eye on the ball. Over the years I experimented with different ways to display the timetable. At one time I was using a six-foot wooden plank that had a strip of Velcro down the centre.
One day I was teaching at a special needs school with low ceilings. As I walked into a classroom the plank wedged itself between the floor and ceiling. Of course I carried on regardless. Later, thanks to the caretaker’s heavy mallet, the plank was set free and ceremoniously dumped in the nearest skip.

I will never forget ‘John’. At the time he was a Key Stage 3 pupil at a special needs school where I teach. He was one of a large group made up of 3 classes of mainly ASD children.
‘John’ was a big fellow and his movement slow and cumbersome. Every week he would lumber in, look around, and, after much coaxing sit in Good Sitting Posture. I was never sure if he was truly engaged or even happy to be in yoga.
One day, in my haste I transposed two posture cards thereby changing the order on the timetable. John became extremely upset would not sit on a mat, charged around and eventually came over to the visual timetable to point at my mistake.  I simply changed their positions and John was himself again.
I learnt TWO important lessons from that.
Apply this maxim to ALL children but especially to those with sensory and neurological impairments.
(c) Copyright 2017 Michael Chissick & Yoga at School. Not to be reproduced or distributed without permission
If you liked that, you'll love this…

Want to teach yoga to children? Not sure which route to take? This short article will set you on the right course
Reading Time: 6 mins

Bear Hunt in the Yoga Lesson

Michael Chissick shares his use of ‘ We’re Going on a Bear Hunt’ to enrich the yoga lesson and enhance children’s appreciation of Michael Rosen’s wonderful words and sounds.
Reading Time: 5 mins

Can Yoga Change a Pupil's Behaviour ?

In the following case study you can read how 'Sinclair’s' behaviour improved significantly because of his success in the yoga lessons over two terms.
Reading Time: 3 mins
Related Resources
Children's Yoga Games Cards
NO BRAINER